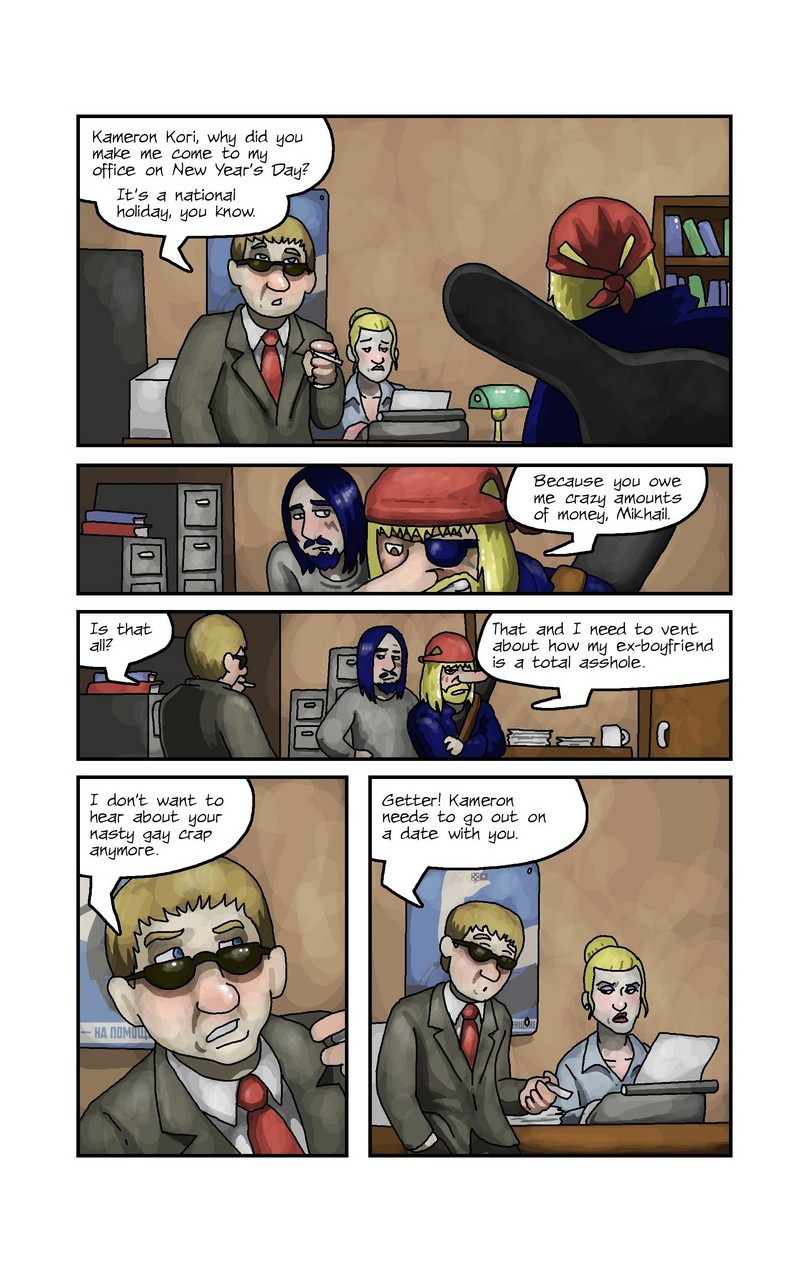 Mikhail’s office is decorated for New Year’s and it has a propaganda poster on the wall. This one is distastefully sexist, but appropriate for the scene: (A Man’s Power -- To Help the Woman.)

Kameron (a.k.a. Camello) is a muscular biker-type wearing a black leather jacket a black shirt with a skull with an inverted maroon triangle behind it, a bandana (red, grey or black). Gold earrings in each ear. His pants are 501 Levi jeans with black leather chaps. His gloves hide his many rings. He sports an eye patch over his left eye. Long-pointed nose He has a black leather guitar case strapped to his back. He is wearing biker boots with belts. His hair is mid-neck length, and he has a short beard.

Tsar is wearing drab gray sweatpants, a fanny pack, and sweatshirt and army boots with a sheathed knife sticking out of it. His hair is between shoulder length and chin length, naturally greasy and straight. He looks like he stopped giving a shit ages ago.

Getter should be wearing something similar to the administrative professional in the middle with her long hair up in a bun. She’s basically all blonde and muscle and slender muscle, very tall.

Frame 1
Mikhail is wearing his sunglasses and smoking. He is completely deadpan. His secretary, Getter is taking notes behind him.
Mihkail: Kameron Kori, why did you make me come to my office on New Year’s Day? It’s a national holiday, you know.
Kameron is clenching teeth and making claw-like gestures with his hand. He is yelling. His bodyguard, Tsar is standing around, cross-armed and looking bored out of his mind.

Frame 2
Kameron to Mikhail: You owe me crazy amounts of money, Mikhail.

Frame 3
Mikhail seems unimpressed, but Kameron seems more coy.
Mihkail to Kameron: Is that all?
Kameron to Mikhail: That and I need to vent about how my ex-boyfriend is a total asshole.

Frame 4
Mikhail massages the bridge of his nose.
Mikhail to Kameron:
I don’t want to hear about your nasty gay crap anymore.

Frame 5
Mikhail points towards Kameron as he turns towards Getter who is diligently typing. She seems a bit surprised and appalled
Mihkail to Getter:
Getter! Kameron needs to go out on a date with you.