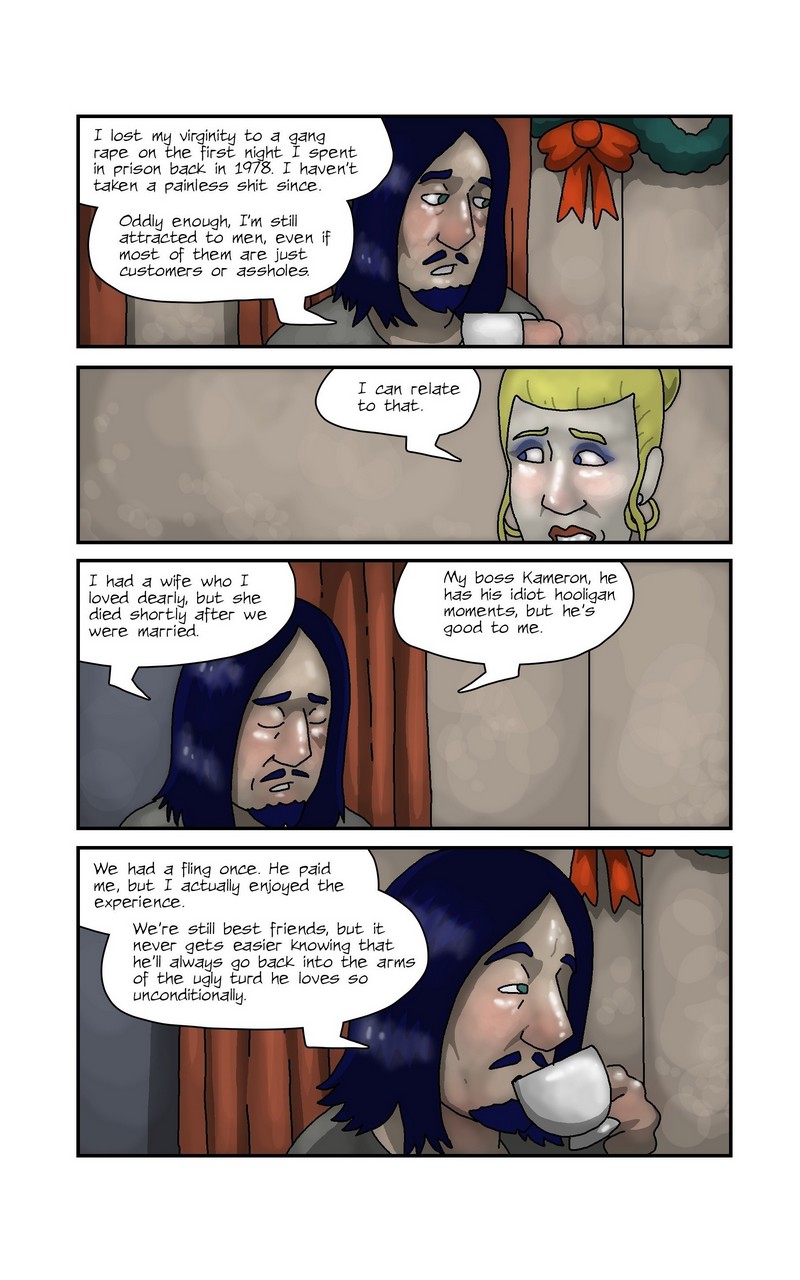 Frame 1
Getter’s eyes grow wide and glassy. She seems horrified on a very visceral level Tsar is uneasy about making eye contact, but he wants to.

Tsar to Getter:
I lost my virginity to a gang rape on the first night I spent in Prison back in 1978. I haven’t taken a painless shit since.
Oddly enough, I’m still attracted to men, even if most of them are just customers or assholes.

Getter to Tsar:
I can relate to that.

Frame 2
Tsar to Getter
I had a wife who I loved dearly, but she died shortly after we were married.

Frame 3
Tsar closes his eyes to take in the pain.
Tsar to Getter
My boss Kameron, he has his idiot hooligan moments, but he’s good to me.

Tsar to Getter
We had a fling, once. He paid me, but I actually enjoyed the experience.
We’re still best friends, but it never gets easier knowing that he’ll always go back into the arms of the ugly turd that he loves so unconditionally.

Sucks to be him in just about all the worst ways.
edit delete reply
20th Mar 2021, 7:51 PM
vaslittlecrow

Well, that's probably why he opened up to his fellow sex worker so quickly. I'm sure that he doesn't exactly have a lot of people that he can talk to about the miseries of his other job.
edit delete reply
21st Mar 2021, 12:39 AM
melaredblu

Makes sense. Honestly, he may not want her as a romantic partner, but so far she seems to have genuine empathy for him. It would do him some good to try to trust her--as a friend. He could use a friend.
edit delete reply
21st Mar 2021, 6:11 AM
vaslittlecrow

Really a bonding moment for those two... so similar experiences, yet so different lives...
Even without work being involved its a messy love- and sexlife he has been going through...
edit delete reply
21st Mar 2021, 6:10 AM
vaslittlecrow

The fact that Tsar's boss is paying him to protect him as a bodyguard and to some extent entertain Getter to the point where she isn't going to complain to her boss about having to escort the "troglodyte," makes the dynamic of even this genuinely lovely budding relationship incredibly messy. Nevertheless, even messes can open opportunities sometimes.
edit delete reply
Post a Comment